TRUMP CONSULTS WITH RICHARD NIXON’S GHOST, IT DOES NOT GO WELL 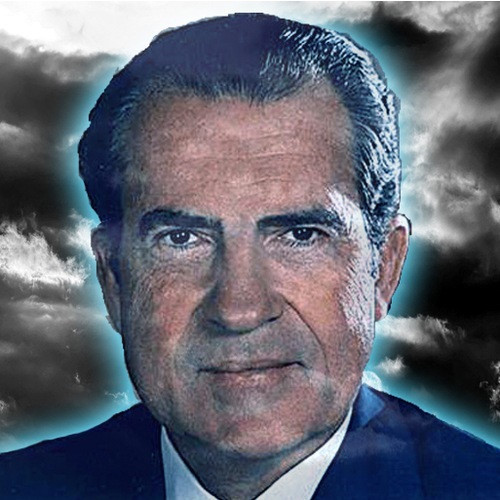 The White House is a sad place these days. Following Joe Biden’s decisive defeat of President Donald J. Trump in the presidential election, the mood in the Oval Office has been forlorn and embittered.

The Lint Screen relays the following transcript of a recent encounter between President Trump and the ghost of ex-president Richard Nixon.

THE SCENE OPENS AT MIDNIGHT WITH PRESIDENT TRUMP OVERTURNING FURNITURE AND SLASHING THE DRAPES OF THE OVAL OFFICE.

DT: I won! Everyone knows I won! Biden’s trying to cheat me!

RN: What the hell are you doing, Donald?

DT: What?! Is that really you–– Tricky Dick?

RN: Don’t call me that. I never liked that name.

DT: Hey, I’ve got your boy, Roger Stone, helping me out. He loves you. Has a tattoo of you on his back.

RN: Roger’s a good man. No morals. Evil as hell. Scum. My kind of guy.

DT: I got him out of some trouble. Busted him out of jail. Maybe he’ll get a tattoo of me.

RN: Maybe he will. Tell me why you’re making a mess of the Oval Office? Is something wrong?

RN: Biden? Is that guy still around?

DT: Yeah. And he’s being mean to me. Very mean.

RN: Mean to you? Hells bells, man, everyone was mean to me. They tried to impeach me for Chrissake.

DT: They did impeach me! Very unfair. Shifty Schiff and Nancy had a huge witch hunt and––

RN: Don’t talk to me about witch hunts. They all came after me for Watergate and––

DT: Watergate was nothing, Nixon. I had Bob Mueller’s witch hunt on my ass for almost two years and––

RN: Everyone was after my scalp, Trump. They wanted all my records, my tapes. That weasel John Dean even ratted me out. And the whole damn thing was on national TV and––

DT: That’s nothing. I have all these late-night shows making fun of me. Colbert, Kimmel, Fallon, Meyers––

RN: Who the hell are they? Christ, I had Johnny Carson making fun of me. Johnny!

RN: The biggest. None bigger. Sounds to me like you’ve got it good, Trump, compared to what they did to me.

DT: No, you’re wrong. Everyone has been very unfair, very mean to me. No one has been more abused than Donald J. Trump. No one in history.

RN: Hell, man, get a grip on yourself. Quit your bellyaching and self-pity. Draw on the courage you mustered when you served in the armed forces.

DT: Very painful. Doctors said it was the worst case they’d ever––

RN: Trump, you sound like a big crybaby. A bellyacher. How in holy hell did you possibly get elected president in the first place?

DT: It was simple. I promised to make America great again.

DT: No. The country was awful back then. Obama was in office. He’s from Kenya. Black. A socialist. There was carnage. He crashed the economy. There were rats and poisonous snake everywhere––

RN: And you made it better?

DT: I built the greatest economy in history. Tremendous economy. Fantastic economy. I was the greatest president ever, even better than Lincoln, everyone says so.

RN: If you were so goddamn great, Trump, why didn’t you get re-elected?

RN: Uh, huh. How many votes did you lose by?

DT: About five million. So far.

DT: They were all illegal. They’re even counting mail-in ballots.

RN: I see. You know what I think, Trump?

RN: I think you’re a big fat loser making a shambles of the Oval Office. You’re not up for the job. Unfit for office. I suggest you grow a pair and start packing.

TRUMP PICKS UP A CHAIR AND HURLS IT AT THE GHOST OF NIXON. THE CHAIR PASSES THROUGH HIS FORM AND CRASHES INTO THE WALL.

DT: That’s not fair. I couldn’t hurt you. I want to hurt you, Nixon. Get back here…

THE GHOST OF NIXON LAUGHS AND VANISHES AS TRUMP SOBS, STOMPING HIS FEET.