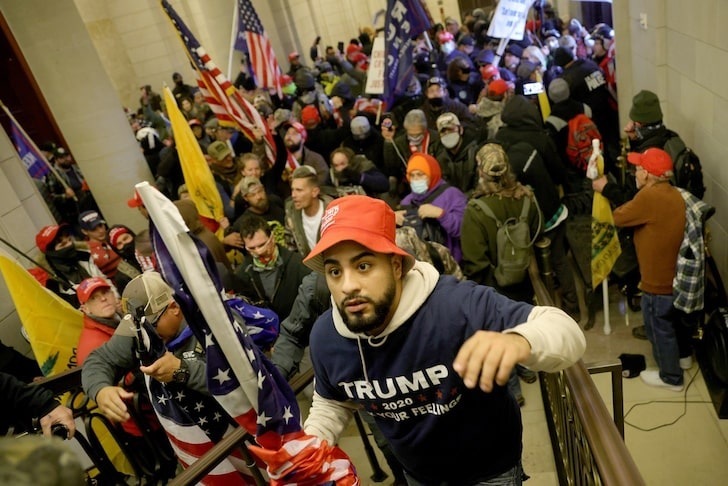 They believe whatever he tells them, and President Donald Trump for months has been telling his rubes if he somehow lost the election it would "be because it's rigged."

And like gullible suckers who believe in magic beans, they bought it. Hook, line, and sinker.

These "patriots" worried that the radical Joe Biden will destroy the beautiful utopian America Donald Trump has built, so they stormed the United States Capitol and trashed it.

"Oh, we did awful good," Bucky Philips of Troy, Michigan tells The Lint Screen. "I think we made the president proud of his proud boys. He's the law and order president and we brought law and order into the Capitol. We can't allow Biden to get into office and cause anarchy. He'll wreck the economy and won't do a good job controlling the COVID like President Trump."

"Biden cheated Trump out of the election," Sheila Jackson of Salisbury, North Carolina says. "The president said he won in a landslide. Won all 50 states–– won them big. Trump don't lie, he don't have to, he's the president! I read on Facebook the Chinese worked with Hugo Chavez, Alex Trebek, and Fidel Castro to rig the election for Biden. That just isn't right, and we're not going to stand for it."

Cal Burson of Selma, Alabama thinks Donald Trump is God. "When he held up that bible in front of the church, I swear it sent chills up my damn spine," Burson says. "Trump's like Jesus his own self. And one dark night after drinking some liquor and smoking some oregano, he came to me in a dream and said the only way to save democracy is to destroy stuff in the Capitol and wave Confederate and Trump flags. When Jesus talks to you, you better believe I'm going to obey."

Francine Kensley of Franklin Tennessee says she was persuaded to storm the Capitol by the president's son Don Jr. "That guy is so dreamy," she says with stars in her eyes. "I'd do whatever he tells me to. I just want to kiss him on the lips. He's going to be our next president after his daddy. Then Ivanka, then Eric. The Trumps are our royal family."

All these MAGA people say they ransacked the Capitol in order to protect our democracy.

"Thank God for good Christian patriots like Ted Cruz and Josh Hawley who bleed red, white, and blue," Amy Catchly from Springfield, Missouri says. "They're looking out for folks like us and not their own political future."

"We can't have elections that aren't fair," says Tim Kincaid of Helen, Georgia. "Had Trump won, then we'd know the election was fair. But since he didn't, we can be a hundred percent certain it was rigged. And we can't stand for that. Trump's never lost, he was on TV and everything."

Jim Tarony displays a Swingline stapler he stole from Nancy Pelosi's office. "I got me some spoils of war," he declares. "Can't wait to staple me some papers."