TRUMP: “BIDEN IS A TOTAL DISASTER, HE’S UNFIT FOR OFFICE” 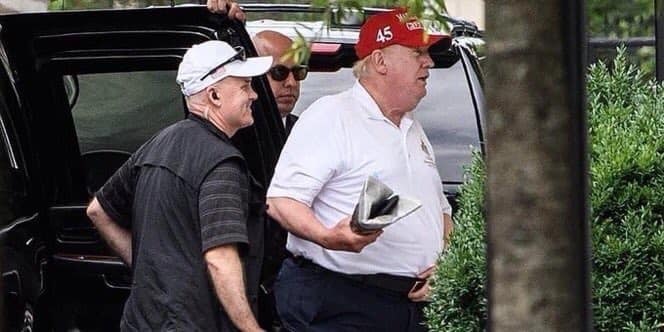 Although he’s left the national stage, disgraced twice-impeached ex-President Donald Trump is not keeping his big yap shut. He summoned The Lint Screen to his luxurious lair at Mar-A-Lago to give his take on Biden’s presidency so far.

“I’m not impressed, not impressed at all,” Trump says between bites of a Big Mac (with extra secret sauce). “Biden’s a total disaster. I give him an F for his presidenting. I was so much better at leading the country. The best president ever. Everyone says so.”

The fitness fanatic made short work of his hamburger, shook a large box of fries into his gaping gob, and began working on a bucket of KFC (extra skin, triple fried).

“Joe is unfit for office,” president #45 says through a mouthful of chewed chicken meat. “He stole the election from me and now America is paying a huge price. Thanks to Biden, millions of people are needlessly getting pricked with sharp needles– very sharp needles– and having a secret chip implanted inside of their bodies. These chips contain the voices of Anthony Fauci, Bill Gates, and George Soros telling them to do socialist things like helping their neighbors, demanding good government, healthcare, environmental safeguards, sensible gun control– those sort of outlandish things. And they are commanded to buy lots of Microsoft products. It’s a disgrace. Very dangerous.” Trump burps, then attacks two drumstick like an angry Keith Moon.

Trump is outraged at the “unfair criticism” Biden and Democrats have made about his attempted coup on January 6.

“The liberals have a lot of nerve,” the svelte ex-prez says. “The people who stormed the Capitol were patriots. They were demanding free and fair elections. They know I won in a landslide, all fifty states, and that Biden stole the election. They weren’t going to stand for it and wanted justice.”

Trump lifts a chicken breast from his KFC bucket. His muscular jaw opens like a boa’s, he inserts the fried delicacy into his eager mouth, closes it, and instantly spits the chicken bone on the floor where a kneeling Sen. Lindsey Graham waits with a garbage bag. The suck-up senator smiles lovingly at his boss as Trump chews and swallows. The chicken lover continues.

“Those attackers who beat and killed people in the Capitol takeover were not my supporters,” Trump says as he reaches for a chicken thigh. “They were all Antifa and Black Lives Matter thugs disguised like MAGA folks. It was a big Democrat plot trying to make me look bad.”

Trump quickly finishes the contents of his chicken bucket as Graham scrambles to retrieve the spent bones.

“I got them, boss,” the South Carolinian says. “Whatever you need, boss man, I’m always here for you! I love you most of all!”

The big man kicks the cloying senator prostrate at his feet. Graham yips and scurries across the room where he cowers in a corner next to a nervous Rep. Kevin McCarthy, an anxious Sen. Ted Cruz, and a dewy-eyed Sen. Ron Johnson. Trump throws the empty KFC bucket at the frightened GOP politicians in the corner.

“Get me more food,” Trump barks. The three politicians dart out of the door in search of essential fuel for their master.

“And another thing,” Trump says, “Biden passed that big relief package. That thing will never work. His stupid plan is to give money to ordinary people?! That’s dumb. Worst idea ever. Everyone knows the only way to goose the economy is giving big tax breaks and deductions to corporations and the 1%. That way, the money trickles down to the peasants and they’ll blow it on bad investments like food and shelter. Biden’s plan doesn’t make any damn sense.”

Trump’s stomach growls like a lion with a megaphone.

“Where the hell are those ass-kissers?” he wonders aloud. “I’m starving to death here! FEED ME!!!”