To What Extent is the Human Population Being Turned into Lab Rats?

A big gripe of scientists is that there are not enough live test subjects. Some are suggesting that participation in research studies should be mandatory—there should be a law…

As a child, my chosen field was to be science. Even then, I ate, slept, and dreamt science. I think like a scientist although circumstances prevented me from entering my chosen field.

I participated in one scientific study in my life. I’m sure they knew by the end of that two-week study that I did not fit the criteria. I am equally sure participants were so scarce they included my data anyway.

I told an MD I was participating in the study. He told me that if I did, I would not be welcome at his practice anymore. I said,

“That’s fine. Nice meeting you.” And went on my way.

I have one published study myself. I did it for a research class in University. But I was more or less forced to go along with my research partner who was my professor or I would have received a lesser grade. I rue that day now.

It is not that the study is inaccurate—it is that it is not entirely accurate. The numbers are good but the numbers should be further broken down. It should have been noted that there was a disparity between student teachers and experienced teachers.

It was in reference to teachers reporting child abuse.

The corruption in Child Protective Services has been rampant for years. Students wouldn’t know this—experienced teachers would. Who knew? I didn’t.

So now there is a study out there that should be expanded upon. It has been and will continue to be referenced.

I read this the other day: 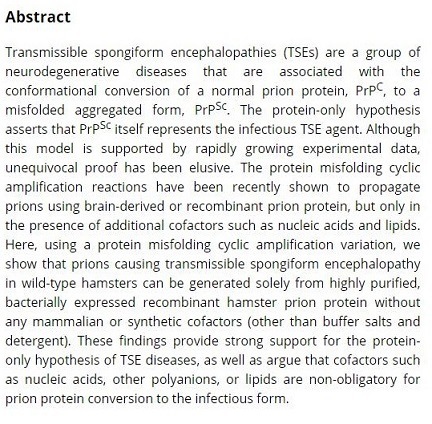 I found it enthralling.

And I read this: 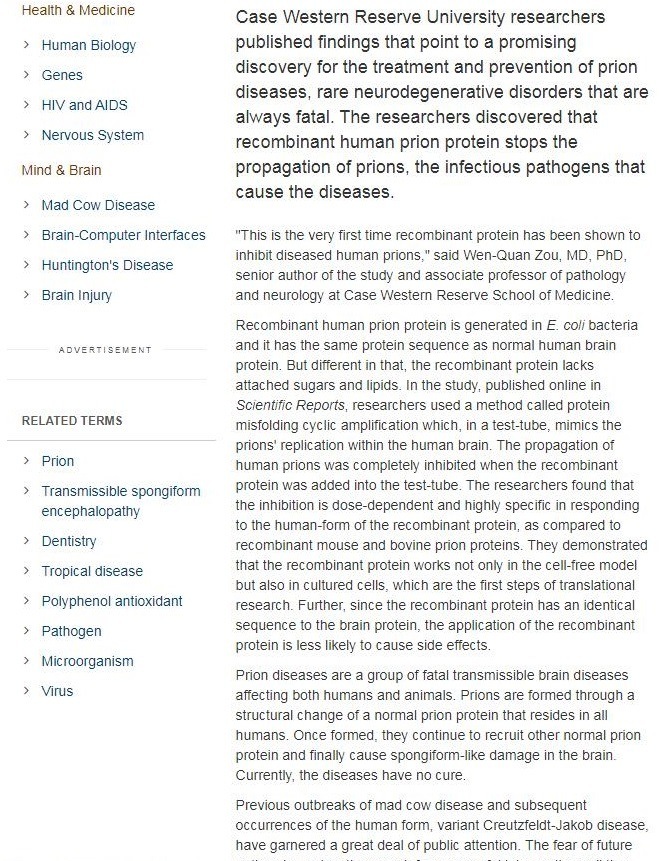 What does this mean? It means there is a process under investigation here to reverse what the previous paper discusses.

There are currently experiments with insertions of genetically modified E. coli bacteria inserted into the Meningitis vaccine.  I read about it and wondered why they were doing it.  Are those bacteria delivering the GM Prions to the recipients?  Will  those Genetically Modified human Prions Protect against spongiform encephalopathy ?

My scientific soul was immediately tickled by such research. My mind went places it shouldn’t have in hoping for the completion of such research. And if there are, indeed, Prions being inserted into these shots, there will be plenty of takers:

Then I slapped myself in the face and thought about consequences.

The truth is: the research participants bear all costs for the consequences of such research. No money is allotted for the care of the damaged.

How do I know?

From 1946-1974, several agencies of the United States government conducted or sponsored experiments on human subjects involving radioactive materials. The agencies included the Atomic Energy Commission and several branches of the military services, among others. Many such experiments resulted in valuable medical advances like radiation treatments for cancer and the use of isotopes to accurately diagnose illnesses. However, the Clinton Administration has questions about whether subjects of some experiments were treated properly. There are indications that in some cases:

(1) some subjects may not have been notified that they were participating in an experiment;

(2) some subjects may not have given proper informed consent;

(3) certain subjects gave consent, but may not have been fully informed of potential health consequences of the experiment;

[I was one and I'm missing a good chunk of my forearm musculature because of x-ray experimentation when I was just a little babe.  When I was a kid, I used to call the skin on that arm my 90-year-old skin. And the fact they burnt the muscle away meant that every time I bumped that arm, I hit bone and it hurt like hell. There is no muscle there to cushion any hits.

These experiments occurred at Beverly Hospital in Beverly, Massachusetts.  So much more of my life is explained now.]

, prison inmates, and hospital patients suffering from terminal conditions; and (5) some experiments served no apparent therapeutic medical purpose. Information about these experiments has trickled out over the years, but the government has never made a true accounting to the American people about this period of the Cold War.


I’ve unknowingly been a lab rat [as have my children] from the day I was born. I have borne all costs of the consequences of any research—my autoimmune disease—my children’s brain damage and so on.

And now I may have a bit of a different take on just why this may be true:

Are Prions In the COVID Vaccines?

If Prions are indeed being inserted into these shots, will it not build a huge population for the study of Prions? Could a cure be found with such large numbers of test subjects?  It's an outrageous concept, I know.

An old man once said to me,

“Nothing is as it seems.”

And if these shots called vaccines are so good for mankind:

Ø Why are our children so sick?

Ø Why are childhood cancers increasing so astronomically?

Ø Why are they spreading the very things they are said to be stopping?

Ø Are we doing nothing more than creating more Human Lab Rats?

H.R.5546 National Childhood Vaccine Injury Act of 1986 is not Broken; It never worked—Repeal it!

“...What the fellow said's, in Italy for thirty years out with the Borges, they had warfare, terror, murder and bloodshed, but they produced Michelangelo, Leonardo Da Vinci and the Renaissance. In Switzerland they had brotherly love, they're 500 years of democracy and peace and what did that produce? The cuckoo clock! So long Holly!”

mRNA Vaccines and Next Generation Testing