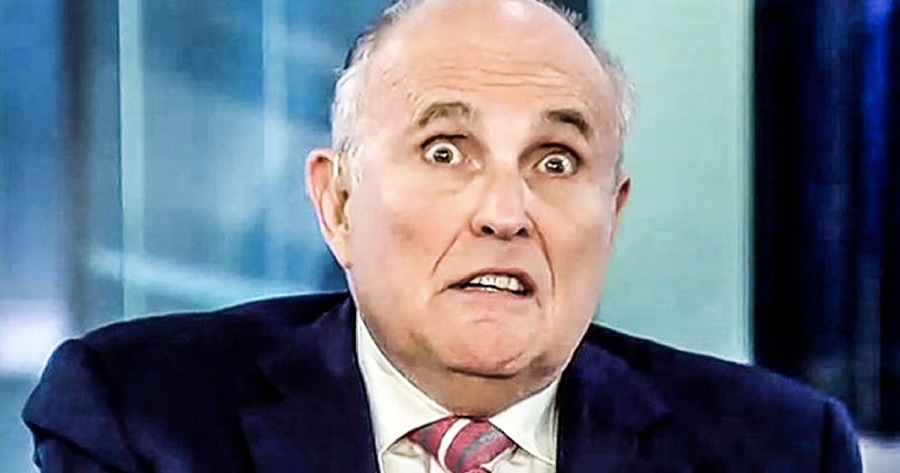 When Rudy Giuliani isn’t touching himself in front of young women, he is America’s watchdog–– scouring the planet looking for evildoers and busting them.

In December 2019, ‘America’s Mayor’ trekked all the way to Ukraine on a very important case.

“I heard all these amazing stories about the evil shenanigans perpetrated by Hunter Biden,” Rudy tells The Lint Screen, as his right hand begins creeping toward his crotch. “I decided I’d better find out what the hell is happening–– there might be something illegal going on with Joe Biden’s crooked son.”

Giuliani restrains his right hand with his left and continues.

“When I got back to the states, I kept up my sleuthing.” The mad-eyed kook flashes his alabaster beaver-size chompers. “One day, I got a call from a computer repair guy in Delaware. He said he had repaired a laptop for Hunter Biden and discovered a file marked “TOP SECRET: KEEP OUT–– THIS MEANS YOU!!!” Can you imagine! You can’t make this stuff up. Anyway, this repair guy’s a real patriot, so he wanted me to have a copy of Hunter’s hard drive that he made.”

Rudy once again realizes his hand has snuck into his pants and wrestles with himself, removing it.

“Now, here’s where the story gets pretty wild,” Rudy says, leaning in. “I start reading some emails that Hunter wrote when he was on the board of Burisma Holdings, a Ukrainian energy company. Just listen to some of these nasty things he and his dad have done.”

The petite fireball reaches into a file folder, producing some papers marked “TOP SECRET” in large red letters, and reads.

“‘Dear Mr. Crime Boss of a criminal enterprise in Ukraine–– I need lots of bribe money to kickback to my criminal dad. He is a socialist madman trying to organize a coup against America’s greatest president, Donald J. Trump, whose children Don Jr., Eric, and Ivanka are very honest, just like he is. Integrity runs in the Trump family. My bad seed of a dad, Joe Biden, is running for president against Trump and demands illegal dirty money to run his underworld organization… so pony up the cashola, or else there will be trouble!!!'”

Giuliani leans back and wipes his brow. “Pretty suspicious, right?” Looking down, the crime fighter notices he has removed his pants and is fondling himself. He stops, gets dressed, and continues.

“Here’s another one, Hunter wrote. This one to China’s President Xi. ‘Dear Almighty Leader Who Owns My Father–– Dad asked me to write to you and request you release the deadly pandemic you have been developing with Dr. Anthony Fauci. The old man wants you to release the virus to make Donald Trump look bad. My father, Joe Biden, says he doesn’t care how many innocent Americans get sick or die. He wants to be president so he can ruin democracy and wipe his butt with Old Glory and The Constitution! By the way, President Xi, this letter and the many others on my laptop hard drive are NOT Russian disinformation. They’re real! Believe me!!!”

Rudy sees that he once again has grabbed himself. He stops, dresses, and shoves the papers into the folder.

“I can’t read any more of these, but I think you get the drift. Joe Biden and his son Hunter are really bad hombres, and President Trump and his children are honest and love America. Trump wants to make America great again, and he will if the dastardly Democrats don’t rig the election.”

As Rudy runs out the door screaming like a banshee, one wonders what crimes he will solve next.