My Brief Sojourn As a Washington Press Corps Imposter

I am a marine industry consultant involved in yacht building project development and management. I am also a professional writer, and was at one time the Senior Editor of Power & Motoryacht, a national special-interest boating magazine. It was in this latter capacity that I once had occasion to (almost) meet George Bush, Senior, at that time President of the United States.

President Bush was an avid fisherman, and had a place in Islamorada, Florida, not far from Key Largo, where the Ocean Reef Club is located. I was at Ocean Reef to cover a reception and celebration being held there by a well-known custom yacht builder. President Bush and his Washington contingent had taken over part of the club for a series of meetings with a visiting foreign head of state. And I took the opportunity to attempt to crash the party.

I later published an article in PMY detailing that (almost) encounter, then in the intervening years pretty much forgot about the piece — until I ran across a tear sheet in my files the other day. Reading it now after all these years, it seems pretty humorous, and with the presidential campaign heating up, I thought it might bring some amusement to an otherwise pretty dreary current political scene.

The "tear sheet" from the magazine is shown in the following image. But don't struggle trying to read the small print. If you scroll down past the image, you will be able to read the text of the article in normal sized font. 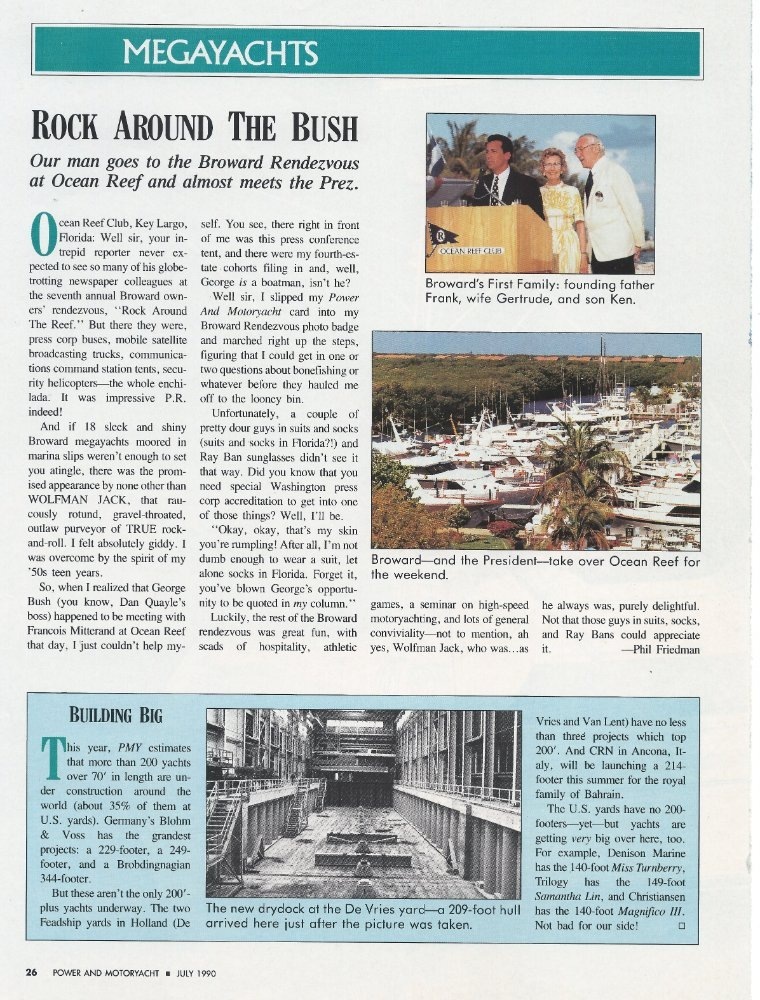 And if 18 sleek and shiny Broward megayachts moored in marina slips weren't enough to set you a-tingle, there was the promised appearance by none other than WOLFMAN JACK, that raucously rotund, gravel-throated, outlaw purveyor of TRUE rock and roll. I felt absolutely giddy. I was overcome by the spirit of my teen years.

So, when I realized that George Bush (you know, Dan Quayle's boss) happened to be meeting with Francois Mitterand at Ocean Reef that day, I just couldn't help myself. You see, there right in front of me was this press conference tent, and there were my fourth-estate cohorts filing in and, well, George is a boatman, isn't he?

Well sir, I slipped my Power and Motoryacht card into my Broward Rendezvous photo badge and marched right up the steps, figuring that I could get in one or two questions about bonefishing or whatever before they hauled me off to the looney bin.

Unfortunately, a couple of pretty dour guys in suits and socks (suits and socks in Florida?!) and Ray Ban sunglasses didn't see it that way. Did you know that you
need special Washington press corp accreditation to get into one of those things? Well, I'll be.

"Okay, okay, that's my skin you're rumpling! After all, I'm not dumb enough to wear a suit, let alone socks in Florida. Forget it, you've blown George's opportunity to be quoted in my column."

Luckily, the rest of the Broward rendezvous was great fun, with scads of hospitality, athletic games, a seminar on high-speed motor yachting, and lots of general conviviality — not to mention, ah yes, Wolfman Jack, who was ... as
he always is, purely delightful.

Not that those guys in suits, socks, and Ray Bans could appreciate it.  — Phil Friedman"

Postscript:   Those were the days when a wiseacre writer like me could pull a dumb stunt like that without getting shot... and without being hauled off to some black site by Homeland Security. When we still had some sense of humor about things political. Fair winds and safe harbors. And cheers! — PLF

Author's Notes:   If you found this bit of reading worthwhile, you may want to take a look at a couple other of my posts:

"Three Points of Advice to My Teenage Daughter"

"Conversations With My Wife About My Writing"

"Why Executive Management Doesn't Get Bad News Until It's Too Late..."

If you'd  like to receive notifications of my writings on a regular basis, click the [FOLLOW] button on my beBee Profile.
As a writer-friend of mine says, you can always change your mind later.


The (optional-to-read) pitch: As a professional writer, editor, university educator, and speaker, with more than 1,000 print and digital publications, I've recently launched an online program for enhancing your expository writing:  "learn2engage — With Confidence" 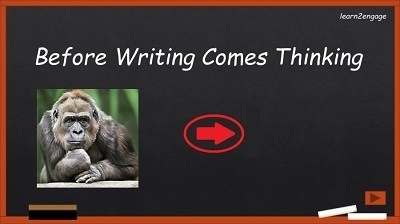 My mission is to help writers and would-be writers improve the clarity of their thought and writing, master the logic of discussion, and strengthen their ability to deal confidently with criticism and disagreement. For more information, click on the image immediately above, or  contact me at  info@learn2engage.org.

#3
I did not agree with George Bush's politics, but I respected him and the office when he was President. I am sad to say that I do not feel that way now. Except for Tricky Dick and his veep, Spiro "Bagman" Agnew, I cannot remember any other time that I've felt this way.

oh, I love this. Give me as chance. I'd do the same. goooooooooooo Phil...

Waiting for President Trump to head down to Ocean Reef, Florida. Will see if I can get an interview.

This share is dedicated to the Jackal who has been following me around lately, and who recently made some ridiculous claims... Anyone interested in seeing where more of my work has appeared can Google "Phil Friedman yacht", and see more about my background than I would ever want to share. Cheers!