MCCARTHY SAYS TRUMP WAS “BRAVE, HEROIC, AND PRESIDENTIAL” ON JANUARY 6 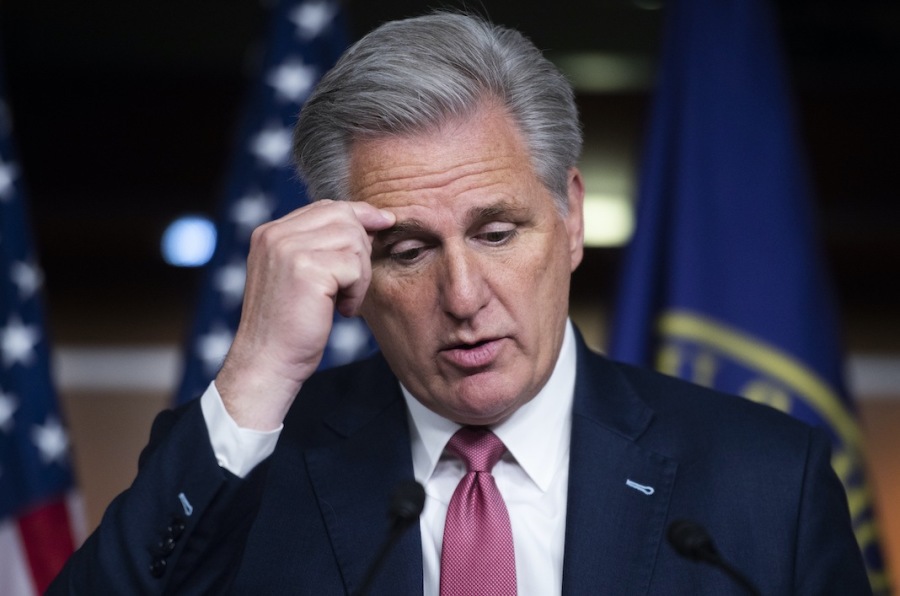 “The liberal media has it all wrong,” McCarthy said. “Donald Trump was a perfect leader on January 6. He was very concerned about the people who thought Biden stole the election from him. We all know that it was impossible for Biden to win after the president was so far ahead on election night. But somehow he did.”

The Californian representative flails his arms.

“Those Trump supporters in Washington on January 6 were concerned about our democracy. What kind of a crazy country would we have if President Trump lost? So the president told his people he would look into the matter. He said he’d walk with them to the Capitol Building and ask Mike Pence to save our democracy. But then, the president’s bone spurs suddenly acted up, and his doctors demanded he recuperate in The White House. Which is what he did, thank God!”

McCarthy claims what happened at the Capitol was liberal theatre.

“Most of the bad apples in the protesters were Antifa, and Black Lives Matter radicalsdressed like MAGA folks,” McCarthy claims, as perspiration beads on his forehead. “Trump people respect law and order, and liberals don’t. The president watched all the evil shenanigans on TV while he cared for his deadly bone spurs. And after a couple of hours, the president took decisive action and filmed a video asking his supporters to stand down. He told his people the truth– that he had been cheated out of re-election. He’s the victim here, everyone knows that. While Trump supporters weren’t doing anything wrong, the president didn’t want them to get blamed for the antics of the angry liberals. But that’s what happened.”

The politician reaches into his breast pocket and takes out a handkerchief. He dabs his eyes and blows his nose.

“I think when you look at everything that happened on January sixth,” McCarthy says earnestly, “you can’t help but come to one conclusion– President Trump was brave, heroic, and presidential. He’s our greatest leader and showed his steel backbone in standing up to the injustices of the fake news media.”

An associate enters the room and hands McCarthy a towel. The GOP leader’s face is slick with dripping sweat, and he begins sopping it up with the towel in his trembling hands.

“And that’s the honest to God truth,” McCarthy said. He tosses the soaked towel to his associate. “Hey, is it hot in here, or what?”