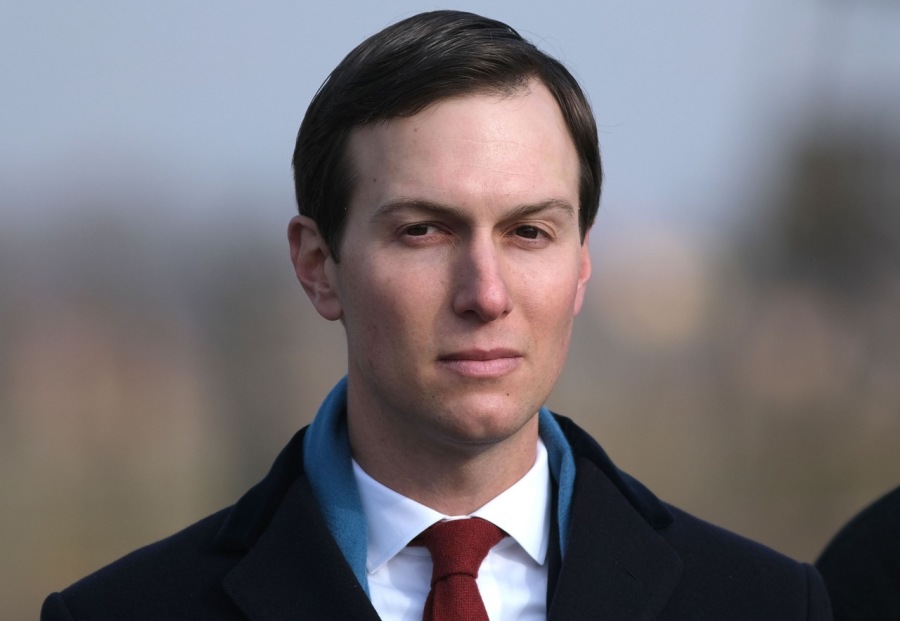 Jared Kushner is not only President Donald J. Trump’s favorite son-in-law, but he’s also his staunchest defender. Today, the dashing, manly wunderkind came to his “Poppy’s” defense in the 2020 election.

“It’s outrageous what’s happened,” Kushner told The Lint Screen. “Donald Trump is without a doubt the greatest president in U.S. history, yet, we had over 72 million Americans cast votes for a raving socialist hellbent on destroying our country named Joe Biden. That’s undemocratic, unpatriotic, un-American. They’ve committed treason. And we will crush them. As the president says, ‘No more Mr. Nice Guy.'”

To that end, Kushner has enlisted hundreds of thousands of lawyers who are scouring voting records and identifying those traitorous people who voted for Biden.

“We plan to prosecute these bastards to the fullest extent of the law,” Kushner proclaimed. “And the penalty for treason is death. We’re researching if there’s a harsher punishment, but, at the very least they will be executed.”

Ivanka’s husband said the entire election was a travesty of justice.

“How could people betray President Trump?” the Kushinator asked rhetorically. “He won a decisive victory and deserved to win because is dealing with this pandemic hoax and needs the support of all Americans. But, he’s willing to live and let live, once we kill all the people who stabbed him in the back.”

Kushner said his father-in-law is excited about serving a second term.

“The president says he’s only just begun making America great,” Kushner said. “And with fewer Americans to care for, he won’t have to deal with the resistance and crybabies. It should be much smoothing sailing until 2024, and, the president may extend his length of stay in office to 2050. We are truly a blessed nation.”

#7
Erroll -EL- Warner Yes Erroll ... thank you ... Trump has had a positive influence in many ways ... bringing jobs make to America ... promoting "Made in America" ... renegotiating trade deals ... promoting women in government ... actually helped the black community ... reminded "We the people" what patriotism is ... unwavering allegiance to the principles of The Founding Fathers & the Constitution ... energy independence ... tax reform including cutting taxes ... vibrant economy until COVID struck ... prison reform ... historic black employment ... historic low unemployment ... reduction of people on government assistance ... fast tracked a vaccine for COVID ... the good news from Pfizer of a vaccine with "90 % effect" revealed today ... mere days after the election (?timing?) ... pushing back against the "Fake News" ... the vast majority of MEDIA has closed their eyes ... have NO inclination to actually report "news" just what THEY deem worthy for the "sheep" to hear ... they all read from from the same "playbook" ... lack awareness or intelligence to even use different words ... they sound like parrots

#5
I can understand why you didn't like it. I can see you are a Trump Kool-Aid drinker. Don't wear a mask–– it's a hoax. Oh, wait, the pandemic didn't go away on November 4. Do you think Trump may have lied? No... can't be.

#6
Sounds like a VERY cool poem. Thanks for sharing, glad you enjoyed my piece.

Harvey Lloyd Loved your reference to "Leave it to Beaver" Eddie Haskell : Look Sam, if you can make the other guy feel like a goon first, then you don't feel like so much of a goon." If only Mr. Rogers could be President .. then we would all peacefully reside in Sesame Street ... ALL "close our eyes" ... enjoy bedtime stories fed by the media who will explain their stories to us to assure that we understand what THEY want us to understand "Oscar the Grouch" will be banned for plain speak and lack of "political correctness" but YEAH!!! there will be many, many compliant "Cookie Monsters" Your reference to Shrek, made me see striking parallels between Shrek & President Trump "sometimes, things are more than they appear." ~ Shrek The Swamp creatures to Trump ... “What Are You Doing In My Swamp!?” “The Swamp” The political SWAMP is filled with slithering “snakes” Blinded, bickering, self-seeking … sneaking SNAKES In their nests they multiple campaigners Beguiling, back-slapping, back-biting FAKERS They are self-serving takers Masters of murmurs and malicious MUCKRAKERS* In their EGO-ecosystem … these self-deceived creatures DO NOT perceive they are snakes Like-minded, surly SOLIPSISTIC ... serving strife that they make This is TRUTH … do not mistake There is no virtue or honor in SNAKE-handshakes … just headaches & heartaches Cunning creatures are snakes … with flicking tongues EMPTY-promises they make Calculating & shrewd … with forked tongues WORTHLESS-promises they break (select lines from a lengthy poem I wrote in 2016 - have yet to publish)

#3
I got a chuckle in this response. Words of wisdom.

Sad post. It's neither humorous nor satirical in nature. It had the potential but fell short. Merely a confirmation bias masquerading as satire. This is so 2020. We are now into the softer gentler nation we will become under the grand leadership of our newly found President, Eddie Haskell. I am pulling my Mr. Rogers sweater out of storage and having it dry cleaned as we speak. I can see the neighborhood will be safe again. Chef Brockett awaits Mr. Haskell's announcement of when he can reopen his restaurant while Lady Aberlin heads to Portland to recite poetry. Mr. Haskell has assured her that all is clear now. He has discharged the police and their nasty little toys and everyone is getting along. Unfortunately Dorothy's vote was miscounted because Toto put his paw on the wrong box, shame on Toto. Her vote for Mr. Haskell went to Shrek and her neighbors told her she cant live in Kansas anymore. Oh the shame of her mistake. No more yellow brick road for her. And Mr Haskell told all the people in story land that all is well because he is now President. Welcome to never never land. Shrek is gone. Donkey is in charge.

Never interrupt your enemy when he is making a mistake. Napoleon Bonaparte The Swamp is smug ... (they think) they got their way. Oh YEAH! ... Hooray! They (think they) have the day. When a puppet becomes a President “We the people” becomes paupers When you reward CORRUPTION & LIES You receive MORE lies & GREATER corruption ... Ashes, ashes, we all fall down ... “Where there is evil will there is an evil way” The dance moves of DARK forces are a DECEPTIVE ballet Before the election ... their chessboard was set to outplay With unknown players & uncounted resources to outweigh Pawns were poised to create chaos. Make the polls a mess The DELUDED powers - think their evil will be blessed Be assured “their sin will find them out" The worst form of deception is self-deception ~ fem-v A destination no one should find appealing ... yet masses have arrived here It is called "Given over" ... sometimes "farce goes too far" ... "treason" ... "murder"

PD Scullin Me doth protest thy exaggeration: "hundreds of thousands of lawyers who are scouring voting records and identifying those traitorous people who voted for Biden" Never interrupt your enemy when he is making a mistake. Napoleon Bonaparte The Swamp is smug ... (they think) they got their way. Oh YEAH! ... Hooray! They (think they) have the day. When a puppet becomes a President “We the people” becomes paupers When you reward CORRUPTION & LIES You receive MORE lies & GREATER corruption Ashes, ashes, we all fall down “Where there is evil will there is an evil way” The dance moves of DARK forces are a DECEPTIVE ballet Before the election their chessboard was set to outplay With unknown players & uncounted resources to outweigh The pawns were set to make the polls a mess The DELUDED powers - think their evil will be blessed Be assured “their sin will find them out" The worst form of deception is self-deception ~ me A destination no one will find appealing ... yet masses have arrived here and are "Given over"