JOHNSON CLAIMS ANTIFA, ILLEGALS, AND ACTORS WERE BEHIND CAPITAL INVASION 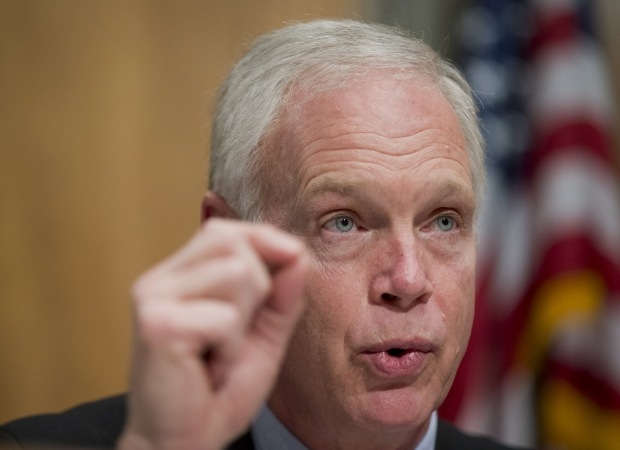 Wisconsin Republican Sen. Ron Johnson should not be around sharp objects. He could hurt himself.

The unhinged looney spun his ridiculous conspiracy theories yesterday at the first public Senate hearing about the Capitol attack on January 6.

“I’m sick and tired of people blaming supporters of President Trump,” Johnson told The Lint Screen. “I wanted to set the record straight that almost no one in that mob was a genuine Trump supporter.”

Johnson told the hearing audience the entire spectacle was “played for the benefit of the fake news liberal media.” He then launched into his incredible narrative.

“The few Trumpers who were there were peaceful, calm, and collected,” Johnson claimed. “The true Trumpers were reading the Constitution. All the agitators were atheist thugs from Antifa, illegal immigrants from the caravan that invaded America, and hundreds of Hollywood actors.”

Johnson referred to numerous papers scattered in front of him, many marked with crayon drawings.

“I have it on good authority the director Rob Reiner, who is a well-known commie agitator, was behind the whole hulabaloo. The event was staged with liberal Hollywood actors dressed in MAGA hats and outfits using prop Trump flags and other items to look like they were actual supporters of the president. I heard they had wardrobe, make up people, script people, even craft services for the actors. It was a major production designed to disgrace our president. I think these kind of leftist shenanigans are outrageous and unAmerican.”

“The few Trump people there were respecting the police,” Johnson declared. “For gosh sakes, President Trump has said many times that he is the law and order president! Why would they disobey him.”

“The worst thing is all the Antifa people dressed like MAGA folks attacking the brave cops and chanting they wanted to kill Mike Pence and Nancy Pelosi.” Johnson took a deep breath. “I wouldn’t be a bit surprised if Pelosi wasn’t behind the whole affair. Democrats have done everything in their power to disgrace President Trump, who everyone agrees is the greatest leader this country has ever had!“

Johnson believes patriots like himself are the only ones left to save America.

“It’s going to take people like me, Kevin McCarthy, Mike Lee, Marjorie Taylor Greene, Ted Cruz, Lindsey Graham, Josh Hawley, Jim Jordan, Devin Nunes, and every good Republican who refuses to play politics and only wants what’s best for our nation,” Johnson declared. “We all know that the only thing that will save America is to do God’s will and get Donald J. Trump, The Chosen One, back in office because Joe Biden stole the election.“

Johnson continued babbling his nonsense after his microphone was shut off and was eventually removed by a team of animal trainers (from Hollywood).