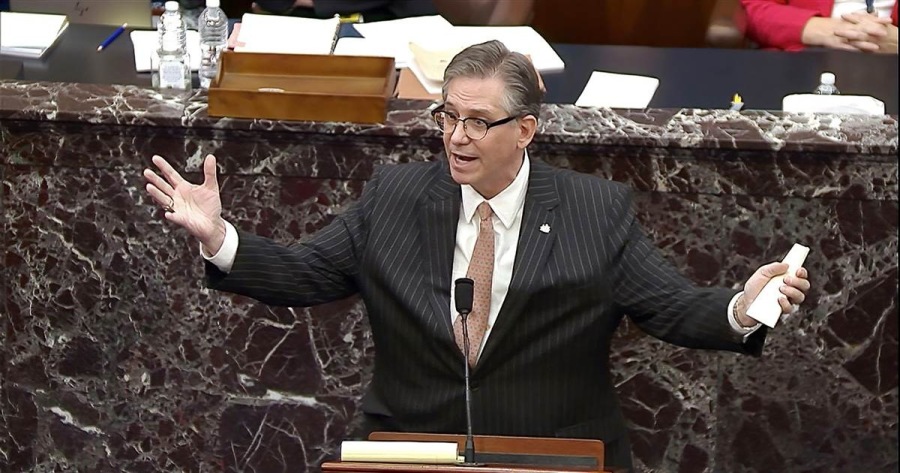 Atty. Bruce Castor, one of the lawyers defending disgraced former President Donald J. Trump in his second impeachment trial, was lambasted after presenting his rambling, incoherent defense to Senators yesterday. Castor reached out to The Lint Screen (Washington Bureau) and requested an op-ed to continue his defense. Here it is in its entirety.

Yesterday I was in that magnificent building many call the United States Capitol, and I presented my airtight argument for why Donald J. Trump should NOT be convicted of impeachment.

“Impeachment” is a funny word, isn’t it? I think impeachment could almost be a flavor for Wrigley’s gum–– with sweet peach taste that’s boosted by a refreshing mint flavor. I believe that Impeachment Gum would be a hit. Certainly much better than Juicy Fruit, which I think loses its flavor too fast. I think we can all agree on that.

Now, I have no beef with Doublemint Gum–– that’s a classic flavor that lasts a long time. Who here remembers the Doublemint Twins–– those attractive girls they used to feature in their TV ads? I remember them and good golly, those girls were pretty as a picture.

I suspect we don’t see the Doublemint Twins anymore because of political correctness. That seems to be everywhere these days, doesn’t it? Some call it P.C. That’s an abbreviation, I believe.

I keep a copy of the Constitution in my breast pocket. I don’t know about you, but I think pockets are one of mankind’s greatest inventions. Stop and think about it–– where would be without our pockets? What do we do with our loose change, our wallets, our car keys, our packages of refreshing chewing gum? I sure wouldn’t want to go through life carrying a box with my personal belongings, but, that’s just me. No, sir. Give me pockets!

Back to the Constitution. The framers of the Constitution–– wait, that’s a pretty funny expression, isn’t it–– framers. Every time I hear that word I think of what framer literally means: to put something in a frame.

Did our forefathers operate framing shoppes? No, I don’t think so. That would be silly, wouldn’t it? I think we can all agree to forget I ever said that.

When we refer to ‘framers of the Constitution,’ we’re talking about the patriots who wrote that sacred document. They did their writing, or framing if you will, on paper. Of course, back in those days they called paper “parchment” which I think is a much classier term. Imagine if you were going through a painful divorce… not that I would wish that on anyone… wouldn’t it be much more powerful to be served divorce parchment than divorce papers?

I think we can all agree on that. I hope every Senator in here has a happy marriage. And Senator Lindsey Graham, I know you’re not married yet. You must not have met the right women, I suppose. I do hope you find that lucky lady and enjoy a long loving union with many children. Aren’t children the best? I don’t think anyone would argue that.

Marriage is a wonderful blessing.

Now, we call the Constitution a sacred document for a reason–– it is almost as if it were written by the hand of God Himself. Now, I don’t want to get into pronoun debates here, please allow me to assume our Lord is a man. After all, He has a long white beard, doesn’t He? I wouldn’t wish a beard on any woman, would you? I don’t think so.

Senator Graham, I think you’d look good with a beard.

But if the Constitution is a sacred document, why didn’t our framers write it on stone tablets? After all, isn’t stone tablets the medium God used when He wrote the Ten Commandments which he gave to Moses?

Let’s face it, stone tablets certainly have more permanence than paper, even if it is heavy parchment!

You know, it occurs to me parchment is another word that could be a Wrigley gum flavor. It would be a chewing gum for when you are really thirsty, or parched, and it has a refreshing mint flavor. One that lasts!

Boy, I don’t know why I have gum on my mind today. I think I may enjoy a stick or two later. Chewing gum relaxes a person, doesn’t it?

We don’t know. Life is full of mysteries, isn’t it?

In the final analysis, I think we have to accept the fact that the framers used parchment and thank goodness we still have the Constitution. And if you read the Constitution carefully, I think we can all agree Donald J. Trump cannot be impeached because he is no longer president and in Washington, D.C., and everyone knows man’s laws do not apply to Florida.

Thank you, Senators. I believe you are all perhaps the greatest humans who have ever lived. True patriots. Especially you Republican Senators. And, Senator Lindsey Graham, I hope you find a lovely bride and are never served divorce parchment.

I rest my case.